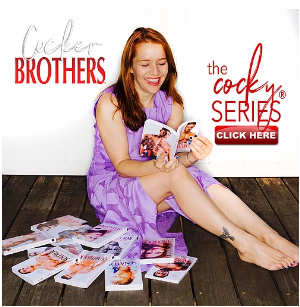 If you’re a writer, and you hang out on Twitter and Facebook, you’ve probably heard about #cockygate.

That description is significant. Because over the past week, Hopkins has begun threatening other romance writers who use “cocky” in their titles–even where those titles are not part of a series, or the word is not used in a series title–with legal action unless they re-title and re-publish their books. 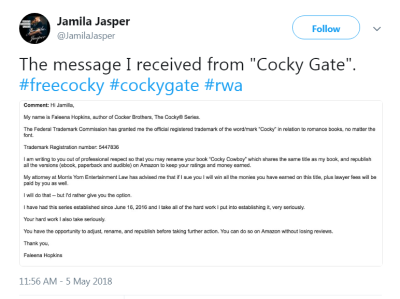 Hopkins says (according to private messages that have been shared with me) that she’s “not after people’s livelihoods”. She also doesn’t think what she’s demanding is a big deal, because taking down and re-publishing a book is “very simple. So easy.” Of course this is a ridiculous claim–especially where writers have multiple editions on multiple platforms, not to mention financial investments in swag, advertising, websites, and other branding efforts.

There’s been plenty of coverage of this bizarre incident. Legal experts have weighed in as well. I spoke with trademark attorney Brad Frazer, who provided me with some clarifying information on a complex and confusing issue.

Note that neither of [Hopkins’ trademarks] is, for example, “a trademark on the word ‘COCKY’ as used in book titles.” The registrations cover a book series, and this is made evident if one looks at the 9-page specimen of use she submitted to the Trademark Office to support the registration: http://tsdr.uspto.gov/documentviewer?caseId=sn87604968&docId=ORC20180416120311#docIndex=9&page=1. Note that “Cocky” appears in each of the titles in a manner that connotes that the book is printed as part of the “Cocky”-brand book series. Indeed, without the fact the word is used as part of a book series, it is unlikely Hop Hop Productions [Hopkins’ company] could have obtained the registrations.

This is because–and this is critical–in order for a trademark to exist and be registrable and enforceable, it must perform a “source identification function.” Here, Hop Hop was able to convince the Trademark Office that it has, since June of 2016, used the word “Cocky” to indicate the SOURCE of a series of romance books, and thus it was able to get it registered. There likely had to be a series of books for Hop Hop to convince the Trademark Office that the word “Cocky” performed this source identification function—one book with “Cocky” in the title would likely not have been enough to convince the Trademark Office, especially given that Hop Hop has ostensibly used the mark for less than two years. Just like when people see “Harlequin” on a book, they think of Harlequin Enterprises as the SOURCE of that book because “Harlequin” indicates more than just a book title. It indicates the SOURCE. See http://tsdr.uspto.gov/documentviewer?caseId=sn72184920&docId=ORC20081030112630#docIndex=10&page=1.

For example, imagine I titled my book, “The Apple Tree and the Pheasant.” Would a consumer realistically believe that Apple Computer was the source of that book? No. Or, imagine I titled my book, “The Harlequin Pleased the King.” Based strictly on that use of the word “harlequin,” would a consumer think that Harlequin Enterprises was the source of my book? No, and thus no trademark infringement.

This is supported by what is called in trademark law the “classic fair use defense.” It is well-settled that you may use a third party’s trademark in the ordinary, English-language sense of the word, and as long as it was not performing a confusing, source-identification function, there is likely no trademark infringement. For example, if I wrote a story about King Neptune and his trident and I titled it, “King Neptune’s Powerful Trident,” if I got sued by the owner of the “Trident” trademark (see http://tsdr.uspto.gov/documentviewer?caseId=sn71653425&docId=ORC20110315095116#docIndex=18&page=1), I would have a very good classic fair use defense in that lawsuit since I am using the word “trident” in its normal, English-language construction (see https://www.merriam-webster.com/dictionary/trident) and NOT TO INDICATE THE SOURCE OF THE BOOK.

Thus, if you have one book and it is titled, for example, “The Gardener was a Cocky Lad,” I invite you to ask: is your use of the word “cocky” performing a source identification function such that people would be confused into thinking that Hop Hop was the source of your book? Is it being used only in a classic fair use sense to describe the gardener in your story as cocky, as defined by Webster? (See https://www.merriam-webster.com/dictionary/cocky)

Now, trademark law is very fact specific, and each case must be decided on its relative merits. There may be some cases in which use of the word “Cocky” in a book title does create a likelihood that a consumer would be confused into believing that Hop Hop was the source of that book. But that is the test. Without that likelihood of consumer confusion, proving trademark infringement is very difficult. But please consider these factors if you receive an allegation of trademark infringement as to your book titles.

Most legal commentary that I’ve read on l’affaire Cocky seems to agree that Hopkins’ trademarks wouldn’t stand up to a legal challenge. But authors who receive her threats–which admittedly are scary–may not realize this, or be able to afford legal counsel (at least some authors have already re-titled their books). Also, more concerningly, Hopkins is sending takedown requests to Amazon, which appears to be complying in at least some cases. Once Amazon takes down your book in response to a challenge, getting it reinstated is a nightmare.

Romance Writers of America is gathering information to consult an IP lawyer, and is asking that RWA members who’ve gotten a threat letter from Hopkins contact Carol Ritter (carol.ritter@rwa.org). Also, a petition has been filed with the US Patent and Trademark Office to cancel Hopkins’ word mark (the design mark, with “cocky” in a stylized font, is apparently a copyright violation by Hopkins).

Below is a link to my challenge to the “cocky” trademark. #CockyGate

The highly respected Trademark Trial and Appeal Board of the USPTO now has the issue before it and will decide whether the trademark of “cocky” should be invalidated!https://t.co/iNKCzPEtNR

And two lawyers at a prestitious IP law firm have offered to work pro bono on a legal challenge.

Meanwhile, the #cockygate hashtag has been joined by #byefeleena. And Hopkins is taking refuge in that old, old claim of Writers Acting Badly: I’m being bullied!

Let there be ridicule.

from Writer Beware®: The Blog https://ift.tt/2wBiSz9
via IFTTT

Sign up for Mystery Author Frankie Bow's newsletter and get a free Professor Molly story. 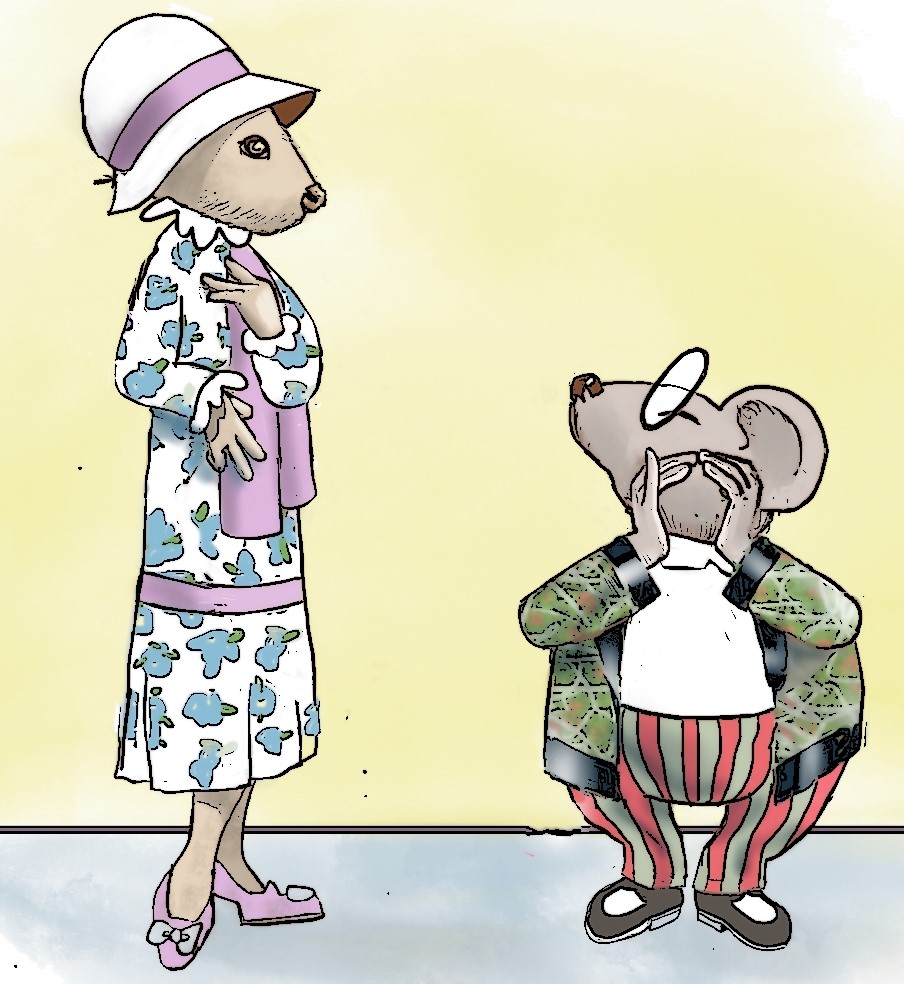 Sign up to be notified of events, releases, and giveaways, and download your complimentary copy of the first Alice and Alistair ebook.